One of my most interesting, and certainly most physically challenging field experience to date, involved sampling at the newly-erupted Fimmvörðuháls lava flows in southern Iceland in 2010. For reasons unrelated to microbiology, much of the world will remember the eruption of the Fimmvörðuháls volcano near the Eyjafjallajökull glacier in April and May 2010.

Every (volcanic ash) cloud has a silver lining!

While much of Europe and further afield looked at the eruption of the Icelandic volcano with dread, the volcanic ash clouds causing havoc to air travel throughout Europe, my then supervisor (professor Charles Cockell) and myself, based at the Open University, saw this as a perfect scientific opportunity, one which we had in a manner, hoped for. Having been in Iceland sampling microbial communities from older, weathered lava the previous summer, we had joked then about the possibility of an eruption providing fresh lava to enable us to monitor the initial microbial colonisation process. Eruptions in 2010 provided us with just that opportunity.

Sampling fresh basalt from the Fimmvörðuháls lava flows in July and August 2010, we proceeded to use molecular analyses focusing on prokaryotic 16S ribosomal RNA genes to characterise the diversity of the pioneer inhabitants of this newly-deposited habitat. What we found were microbial communities adapted to this harsh environment, displaying potential for iron and sulfur metabolism, and for the utilisation of atmospheric nitrogen.  Such organisms, predominantly Betaproteobacteria, dominated these communities, suggesting that prevailing conditions within the lava flows exert a selective pressure on the inhabitants.

Our study was the first to provide an in-depth characterisation of the microbial pioneers of terrestrial basalt. These inital colonists were unlike communities we had previously identified within weathered terrestrial Icelandic basalt. While Fimmvörðuháls communities were composed mainly of Betaproteobacteria and of low diversity, those in older basaltic lava were mainly Actinobacteria and Acidobacteria. The more diverse communities in older, weathered basalt also contained other phyla, such as the photosynthetic Cyanobacteria, a phylum which molecular methods failed to detect in the pioneer Fimmvörðuháls communities.

These and other results of our Fimmvörðuháls community analysis were published in May 2014 in Microbial Ecology, here. 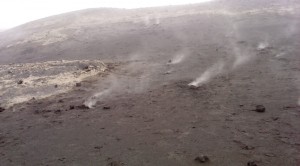 Obviously there was still some warmth underfoot in August. The only thing which kept us reasonably warm in amidst the glaciers in the pouring rain 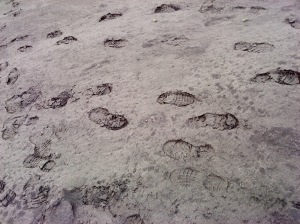 Our tracks in Icelandic vocanic ash 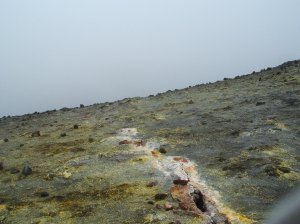 The presence of sulfur was obvious, both from the colour and the smell atop the caldera

An eerie place: and no skills required to track us. Footprints everywhere! 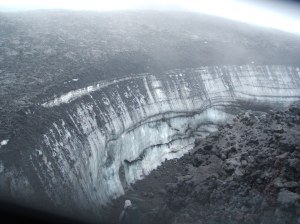 Where Ice and Lava meet. A noisy place with the sound of glacial melting

What’s not in the publication

The colonisation of the Fimmvörðuháls lava flows was rapid. The pioneer communities also comprised fungi, which increased in abundance from July to August. As there are many factors which may affect the colonisation of such terrestrial habitats, in addition to sampling we installed a weather station overlooking the caldera, the purpose of which was to take environmental readings on a regular basis and transmit this data back to the UK for analysis, allowing us to compare environmental parameters with community data from future lava samples. The station was equipped to measure UVA, UVB, wind speed and direction, rainfall, temperatures above and below ground, and was fitted with a camera to record the change in physical environment over time. The station was solar powered, which we realised was a problem in winter when days were short and the panel became covered by snow. 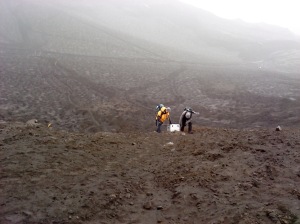 With one of our guides (in yellow)

Our weather station in August 2010, all 60kg of it, overlooking the caldera

‘Luxury’ accommodation (the white dot top right quadrant on the ridge) (this image is courtesy of the Natural Environment Research Council (NERC), UK)

This research was funded by the Natural Environment Research Council (NERC)

The Principal Investigator on this project was Professor Charles Cockell

Geomicrobiology and Microbial Ecology by Laura Catherine Kelly is licensed under a Creative Commons Attribution 4.0 International License.
Based on a work at https://laurackelly.wordpress.com.

Please feel free to send comments or questions on this work: